Bettas, also known as Siamese fighting fish, are delightful little creatures, and we naturally want to know more about them. One of the questions that get asked a lot is “Do Betta fish have teeth?”

Before you lose sleep over this little mystery, yes, Betta fish do have teeth. And for some of the reasons that we humans have them too, such as for eating and predation. Plus if you’re interested in that, there are also many other facts that you can learn about Bettas!

This article will talk about Betta fish teeth and other facts about this part of their body. Read on if you’re interested and want to learn more about our pet fish!

What Do Betta Fish Use Their Teeth For? 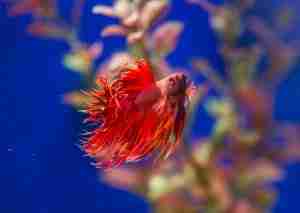 It may seem like Bettas don’t do much other than float around and look pretty, but they actually use have sharp tiny white teeth that they use for a few different purposes. Here are some of them!

The first and most important reason why Betta fish have teeth is for eating. Bettas are omnivorous and need to eat meat to survive. In the wild, they typically eat small insects, crustaceans, and other small animals.

To eat their food, Bettas use their teeth to tear it into smaller pieces. This allows them to eat more easily and digest their food properly.

Without teeth, Bettas would have a hard time doing this, which would eventually lead to them starving to death. That’s why having sharp teeth is essential for their survival.

Bettas are also known to be aggressive predators and use their teeth to help them catch their prey. Wild Bettas will often hunt and eat other small fish. Their sharp teeth help them to grip onto their prey so they can eat it.

As mentioned above, Bettas usually eat small insects and insect larvae, but they can also eat other small fish. They will try to eat anything that fits into their mouths, and we mean that literally. They’d even eat human food if they had the chance.

So, if you have a Betta and are worried about them eating their tank mates, you can always put them in a tank by themselves.

This is usually a sign of aggression and is how Bettas establish their dominance over each other. If you see your Betta doing this, it’s best to leave them alone and not intervene.

Bettas also use their teeth to explore their surroundings.

One thing that Bettas are known for is bubble nest building. Most people don’t know this, but Betta’s teeth actually play a part in helping them build bubble nests.

That’s because when Bettas create their bubble nests, they use their teeth to grip onto the plants and leaves that they use to build their homes. If they didn’t have teeth, they wouldn’t be able to do this.

Do All Betta Fish Have Teeth?

Now that we know what Bettas use their teeth for, you might be wondering if all Betta fish have them. The answer is yes, all Bettas have teeth, at least the species that we take care of at home called Betta splendens.

However, sometimes, there are Betta babies that are born without teeth. This is a very rare and serious abnormality. Obviously, these Bettas can’t eat properly without teeth. As a result, they often don’t survive for more than a few months.

Do Betta Fish Have Teeth When They Are Born?

When Bettas are born, they don’t have any teeth. It takes them a few weeks to grow their first set of teeth.

These baby teeth are called “milk teeth” and are different from the adult teeth that Bettas have. Milk teeth are smaller and less sharp than adult teeth.

As Bettas grow, their milk teeth will eventually fall out and be replaced by their adult teeth. This process is called “shedding” and usually happens when Bettas are about 3-4 months old.

Do Betta Fish Lose Their Teeth?

If a Betta loses a tooth, it will usually grow back within a few weeks. However, the new tooth may not be as sharp or strong as the original one. To help your Betta out, you may want to dissolve Betta pellets, like Fluval Fish Food or Tetra BettaMin in the water so that they can eat it easier.

Why Do Betta Fish Bite People? 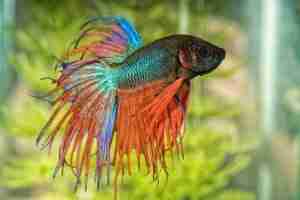 Betta fish have a reputation for biting people. However, it’s important to note that there are a few reasons why Betta fish bite.

If you stick your finger in their tank, they might bite you because they think you’re food. Bettas are predators and their instincts tell them to eat anything that moves.

Bettas are also very territorial and might bite you if they think you’re invading their space. If you put your hand in their tank, they might see it as a threat and bite you to defend their territory.

Betta fish bites usually don’t hurt, but they can if the Betta bites down on a nerve or joint. If this happens, it might cause some pain or numbness in the area that was bitten.

If you do get bitten by a Betta fish, make sure to clean the wound with soap and water to prevent infection. Betta’s teeth don’t usually cause infections, but it’s still worth erring on the side of caution.

Why Does My Betta Fish Bite And Not Let Go? 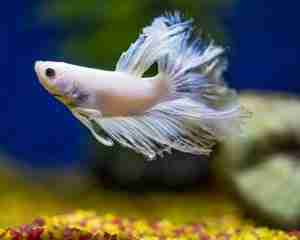 Most Betta bites on humans are accidental, but sometimes, there are instances when a Betta fish bites and doesn’t let go. Again, it’s not a common occurrence, but it does happen occasionally.

There are a few reasons why your Betta fish might bite and not let go.

They Want To Eat

As we mentioned before, Bettas are predators and their instinct is to eat anything that moves. If you put your hand in their tank, they might mistake it for food and try to eat it.

If they do bite you because they think you’re something delicious, they’re not going to let go because they want a snack.

Bettas are also very territorial and might bite if they think someone or something’s invading their space. Obviously, they’re not going to let go in this case because doing so would mean giving up their territory.

Bettas can also get stressed out or scared and might bite you if they’re feeling overwhelmed. If you’re handling them roughly or if their tank is too small, they might bite you because they’re scared or stressed.

How Strong Is a Betta’s Bite?

A Betta’s bite is actually quite strong for their size. While their bites might not be strong enough to break human skin, they can still cause some pain if they bite down on a nerve or joint.

For other fishes and smaller creatures, though, a Betta’s bite is definitely strong enough. Their teeth are sharp and they have a lot of jaw muscle, which allows them to grip onto their prey tightly.

This is why putting them around other fish with long fins, such as guppies and other Bettas, isn’t ideal. Not only can they get stressed if they have these fishes as tank mates, but they can also end up biting each other and tearing each other’s fins to shreds.

Additionally, some stressed Bettas actually resort to something called tail-biting. This is where they bite their own tails out of stress or even boredom. If you see symptoms of tail-biting, you better do something to help your Betta fish as soon as possible.

Do Betta Fish Bite Other Fish?

Betta fish are predators and they will certainly not hesitate to bite other fish for any of the reasons listed above.

The most common one is if they think the other fish is food. In fact, Bettas are known to try and eat other small fish, such as young fry. It’s a bad idea to put Bettas around other fish in general, but to put a Betta inside a tank with young fry is simply a recipe for disaster.

If you have a Betta and are worried about them eating your other fish, the best thing to do would be to separate them and put them in their own tank, preferably at least 5 or 10 gallons.

How To Stop A Betta Fish From Biting 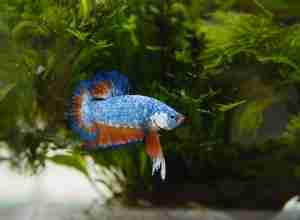 A biting Betta fish may be natural, but it’s understandable if you want to remove this behavior from your beloved pet. If you don’t want your Betta to bite you or other fish–or you–there are a few things you can do.

When handling your Betta, always be gentle. Approach their tank slowly and try not to make a lot of noise so as not to scare them. If they feel scared or threatened, they might bite out of fear.

Also, when you’re cleaning their tank or doing anything that might require you to put your hand inside, do it slowly and calmly. If they feel like you’re invading their space, they might try to bite you.

Get Them Used To People

If your Betta isn’t used to being around people, try slowly getting them accustomed to it.

Start by sitting near their tank for short periods of time and letting them get used to your presence. Once they’re comfortable with that, you can try gently petting them.

Get Them A Bigger Tank

One of the main reasons why Bettas get stressed out is because their tanks are too small.

The minimum size you should be looking at is 5 gallons, although it’s recommended that you put them in a tank of at least 10 gallons. Anything smaller than five isn’t really recommended by experienced Betta fishkeepers.

Bettas are territorial creatures and need their own space. If their tank is too small, they might get stressed out and might try to bite you as a result. Make sure their tank is big enough and they’ll be much less likely to act out.

Give Them Hiding Spots

Bettas like to have places to hide. In the wild, they live in rice paddies and other areas with a lot of vegetation.

In your Betta’s tank, you should also try to mimic their natural environment as much as possible. Provide them with hiding spots, such as caves, plants, or even just pieces of driftwood.

This will help them feel safe and secure and will reduce their stress levels. If they’re not stressed, they’re less likely to bite, even when they get caught by surprise. 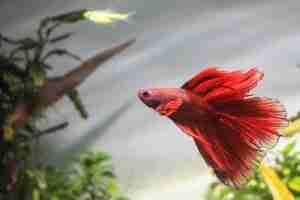 Do all Betta fishes have teeth?

Betta fishes do have teeth. This is especially true for the species of Betta that is most often kept as a pet, the Siamese fighting fish or Betta splendens.

Betta fish do bite. They may bite other fish, humans, or even themselves. If you think your Betta is biting too much, try provide them with a larger tank, more hiding spots, and less noise and activity around their tank. You can also try slowly getting them used to being around humans.

Can you touch a Betta fish?

You can technically touch a Betta fish, but you should be careful. Bettas are known to bite, so approach them slowly and gently. Not to mention, there isn’t generally a reason for you to touch them. One of the reasons is that it can affect the slime coat that protects them from diseases.

Betta fish are beautiful creatures that make great pets. However, they are also predators with sharp teeth that can bite. Due to this, it’s best to be careful when handling Betta fish or when putting them in with other, smaller fish.

The most important thing is to ensure that your Betta fish is living a safe, stress-free life with plenty of places to hide.