Betta fish are famous for their aggressive behavior. So much so that even some popular guides suggest never keeping a betta fish with any other tank mates. Otherwise, they will be killed or eaten. But is that really true? Do Betta fish eat other fish?

Betta fish will eat other fish that are small enough. Bettas have small mouths. So only baby fish fry and nano fish are in danger of being eaten.

The list of fish that are in danger is smaller than you think, however.

Do Betta Fish Eat Other Fish? 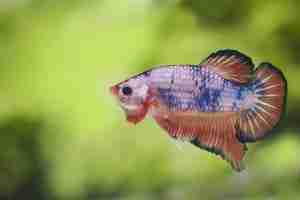 Will a betta actively seek out tank mates to kill? Rarely and only due to mistaken identity.

Some aquarium fish look very similar to a rival male betta. This can cause a betta fish to chase around tank mates, trying to force them from his territory.

Bettas eat anything small enough to fit in their mouths. But this is true of any fish that happens to be carnivorous. Even neon tetras will treat the fry of livebearers and other community tank species as food.

That said, betta fish normally don’t hunt down and kill other fish as a food source.

Brine shrimp, blood worms, and other invertebrates are what betta fish prefer to eat. So long as your tank mate choices aren’t too small, most fish are in little danger.

Common Freshwater Aquarium Fish That Bettas May Try To Eat

Most other fishes are safe from a predatory betta. Since their mouths are so small bettas only eat small prey items. But there are a few other fish you should avoid keeping as tank mates for a betta fish.

Chili rasboras are some of the smallest aquarium fish you can own. These nano fish are found in the blackwater swamps of Borneo, Indonesia.

Since they thrive in tropical temperatures and soft, acidic conditions, you would think they are perfect tank mates for betta fish.

But the tiny fish are too thin and make tempting additions to a betta’s diet. They are faster than an adult betta fish, which will be slowed down by its long fins. But a persistent betta fish will eat a few.

Guppies are small fishes that can find a place in almost any community tank. Being such a peaceful species, they tend to mind their own business. Unfortunately, betta fish often have other ideas.

The other species in a betta’s tank that will most often provoke aggression are other fish with long, flowing fins and bright colors. Male guppies have both of these qualities.

Unless you have a big enough tank a betta fish will chase a guppy endlessly. The betta fish is treating it like a rival male betta. It may even bite a guppy when cornered.

Adult guppies, even males, are too large to be eaten by a betta fish. But baby fish are another story. Guppies are called “million fish” because they can have hundreds of live young at a time.

Baby fish are a favorite food source for adult betta fish. If you want to save some of them, make sure your tank has enough hiding spots. That way, some of the baby guppies will make it to adulthood.

Female bettas are a special case tank mate. A male betta won’t go out of his way to eat a potential mate, after all. All animals need to find their own kind and breed.

The problem here is that male bettas are both larger and more aggressive than female bettas. If the female is not ready to mate his attempts to court her will cause constant stress.

In the wild, she would simply swim out of his territory. But in an aquarium, she can’t escape his attention.

A male betta can sometimes grow aggressive if he feels ignored, biting and trying to chase her away. Eventually, she will die from the attacks, and your male betta fish may eat the corpse.

If you decide to keep both sexes, don’t add just one female betta fish to the male betta tank. Add two or even three females. This way, the male’s attention will be divided between each female.

Groups of female betta fish can also live together in relative harmony as they don’t fight as male bettas do. You can even set up a female-only betta sorority if you don’t want any males.

In the wild, betta fish eat insect larvae and other invertebrates regularly.Unfortunately, small shrimp are also on the menu for these carnivorous fish.

An adult red cherry shrimp is too large to be swallowed whole. But a hungry betta fish may try snapping off legs or heads.

Red cherry shrimp are also prolific breeders. Anyone who owns them will soon find themselves with a tank full of baby shrimp. The bright red color and small size of newly hatched shrimp make them prime targets for a predatory betta fish.

Other common freshwater shrimp species are also at risk from a hungry betta fish. Young ghost shrimp may also be eaten if caught off guard. But adult ghost shrimp are too large and alert to make good betta food.

Do Betta Fish Eat Their Own Eggs And Fry? 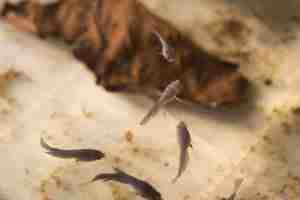 Believe it or not, betta fish are excellent parents. Better than most other fishes, which tend to scatter their eggs and leave. If they rediscover their eggs in the tank they only see a potential food source to be eaten.

Betta fish build nests to lay their eggs in. If you’ve ever seen your male betta blowing bubbles, this is the likely reason.

Normally, they prefer building these bubble nests in hiding places among floating plants near the water surface. But in a home aquarium, they will choose a corner of the tank with few currents.

The male then tries to entice a pregnant female to come and visit. Once she arrives, they embrace and the eggs are laid and fertilized.

Male bettas watch over the eggs for days before they hatch. And even after they hatch the father defends them aggressively until they are ready to leave the nest.

The only time a betta will treat their own eggs as fish food is when an egg goes bad. Eggs that catch fungus have to be removed from the nest. Otherwise, the fungal threads can spread to healthy eggs, killing them.

Any eggs that become fuzzy and opaque were likely infertile, died, and caught fungus. These bad eggs will be eaten by the father to save the good eggs.

Do Betta Fish Ever Try To Eat Other Bettas? 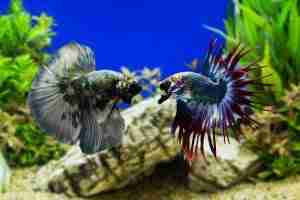 For the most part, betta fish live alone. They earned the name siamese fighting fish because the males will display and fight for territories among the rice paddies of Thailand.

But if they are forced into regular contact in the same tank, will betta fishes try to eat each other?

A betta killing a rival is not the same as cannibalism. While male betta fishes may bite at the corpse of a dead competitor he’s more likely trying to force the body out of his territory. And even if he’s eating the corpse, this is opportunistic feeding and no more.

Unless you have a very large tank, betta owners should never keep two males together. The minimum tank size for multiple male bettas is 40 gallons of space. This way, a defeated rival can stay healthy and away from the turf of the dominant male betta. 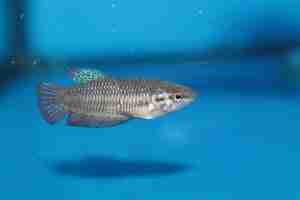 Still not convinced your betta isn’t a predator? Here are a few more frequently asked questions on whether betta fish eat other fish:

Not all fish are in danger in a betta tank. But guppies are one species that tends to get bullied often – or even eaten.

Male guppies are too close in appearance to a rival male betta for comfort. Many betta fish will chase them around until they die from stress.

If you must keep guppies and bettas together, the minimum tank size should be is 20 gallons or more. In a larger tank, your male guppy will have more space to avoid an angry betta.

The fry of guppies and other livebearing fish are also just the right size to be betta food. This video shows just what a betta will do to any livebearer fry it comes across.

Still, guppies can have hundreds of babies at a time. Even the hungriest betta won’t be able to eat all that food. Especially if the aquarium has plenty of plants and other hiding places.

Betta fish eat other fish that are small enough. But even a small pet store goldfish is much too large to be fish food for a betta. Goldfish are thick-bodied carp and look too different to inspire any aggression from most bettas.

Betta fish are carnivores that eat mosquito larvae and other prey. Goldfish are omnivorous and need algae and other vegetation in their diet. This means that their prepared food blends should not be mixed.

Some people keep betta fish with goldfish because a betta will tolerate room temperature conditions. But they are truly tropical fish. Being kept continually cold impacts their immune system, desire to eat, and growth rate.

Do Betta fish have teeth?

Betta fish do have teeth. These teeth are so small that it’s easy to miss them. Their teeth allow a betta to grip insect larvae and other live food when eating.

Sometimes a hungry betta fish will snap at anything at feeding time. Even the fingers of an aquarium enthusiast may look like a large pellet to bettas. But betta fish teeth are too tiny to even be felt by you.

However, when you are the size of a small fish the situation is different. A betta does have teeth large enough to take bites from the fins of any tank mates he doesn’t like.

Still, betta fish aren’t predators who use their teeth to kill tank mates for food. Any tank mate deaths will come from stress, not bite wounds. 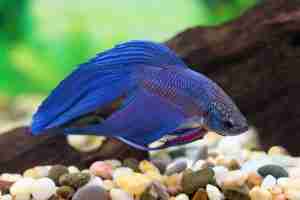 Do bettas eat their tank mates? Almost never. Most fish are much too large to be food. And even fish that are small enough can move faster through the water column than a betta fish.

Guppy fry, small shrimp, and snails are the only pets you need to worry about. All of these are natural food for betta fish!