We’ve all thought about it, but can our beloved betta fish eat some of what we’re having? Can betta fish eat human food? It seems like they should, but before you go throwing some of whatever’s on your plate to your aquarium, you first need to know the specifics.

Betta fish can eat some human food, but it’s generally not advised to feed them oily, processed food. Fruits, greens, and seafood chopped in appropriate portions can serve as some variety for your fish, but there are still plenty of things you need to know about.

In this article, we’ll discuss what kinds of human food your betta fish can eat, as well as how much you should give to them.

Can Betta Fish Eat Human Food? Which Food Is Safe For Them To Consume? 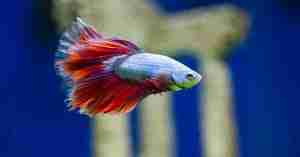 Betta fish can technically eat most human food, but there are some things you should avoid feeding them.

Here are some of the human foods that betta fish can eat.

Non-citrus fruits and vegetables are a great way to add some variety to your betta’s diet.

Some of the best options include spinach, zucchini, peas, broccoli, Brussel sprouts, cucumber, and kale. You can either feed them these foods raw or cooked, but make sure to chop them into small pieces first.

Peas, in particular, are good for bettas. They’re high in fiber and digestive benefits, as well as an effective treatment for constipation and bloating in betta fish. Simply boil a couple of peas until they are soft enough, peel the shell off, cut them into little pieces, and add them to your aquarium.

You can also feed them fruits like watermelon, cantaloupe, and honeydew melon. Again, make sure to chop these up into small pieces before feeding them to your betta fish. Also, don’t overfeed them and only give them a small amount each day.

Strangely enough, Betta fish love seafood. Shrimp, crab, lobster, and other shellfish are all great options. Similar to the above, you can also feed them these foods raw or cooked but always remove the shells first so that they don’t get hurt accidentally.

You can also feed them fish like tuna, salmon, and sardines in tiny pieces. It’s best to feed them fresh fish since canned fish can have unwanted preservatives in them.

However, if you have no other option but canned fish, choose one that isn’t steeped in oil. Go for an unflavored one without too many preservatives and additives.

Bread and cereals can also be fed to betta fish in very small quantities. You can either give them the dry bits or soak the bread in water until it expands. Just make sure to remove any large pieces that haven’t broken down yet so that your betta doesn’t choke on them.

However, it should be noted that feeding bread to betta fish may cause bloating. Therefore, it is best to feed them bread only in moderation, or not at all.

Chicken, turkey, and other meats

You can also feed your betta fish chicken, turkey, and other meats. Again, make sure to remove the bones. Even better, shred them fully before feeding them to your betta fish.

You can either feed them these foods raw or cooked, but avoid giving them anything that’s too greasy or fatty. Also, if you’re cooking them, don’t put any herbs or spices in as they could be dangerous to your betta. 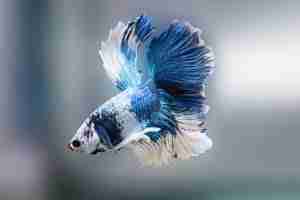 In general, it’s best to avoid giving your betta fish any human food that is processed, oily, or high in fat. Foods high in fat can cause swim bladder disease in bettas, which makes it hard for them to stay afloat.

What Do Betta Fish Normally Eat In A Tank?

In a home aquarium, betta fish can be fed a variety of different foods. Research shows that the type of food you feed your betta can have an effect on its health, particularly its breeding efficiency.

Here are your options!

There are a variety of different betta pellets available on the market. These pellets are typically made from fish meal, shrimp meal, and other similar ingredients.

Pellets are a fantastic option for betta fish because they contain all the nutrients that bettas need to stay healthy. They’re also easy to digest and they don’t cloud the water as much as other foods.

Some of the best betta pellets you can find on the market right now are:

Flake food is another option for betta fish. These flakes are typically made from a variety of different fish, including herring, anchovies, and sardines.

Flake food, like pellets, contains different nutrients. However, it’s important to soak the flakes in water before feeding them to your betta. This is because the flakes can expand in your betta’s stomach and cause problems.

Also, flakes have a tendency to cloud the water if your betta ends up not eating them all. Make sure to scoop out leftovers so that they don’t make the water dirty.

Here are some of the best fish flakes for betta that you buy today:

Live food is great for bettas because it contains a lot of nutrients. Additionally, live food can serve some challenge to your betta as they have to catch it.

Frozen or freeze-dried food is another option for betta fish. The options typically include the same options that you have for live food. Some of the most popular frozen food for bettas include frozen insects, larvae, worms, and even crustaceans.

The most popular freeze-dried food for bettas is bloodworms, which are a good source of protein. Unlike live bloodworms, the freeze-dried option is preferable for many owners since it’s easy to store and lasts much longer.

You can feed frozen or freeze-dried food to your Bettas 2-3 times a week. Think of them as a treat that shouldn’t replace their regular pellets or flakes.

Here are some of the best frozen or freeze-dried food you can get for your betta:

How Often Should You Feed A Betta Fish? 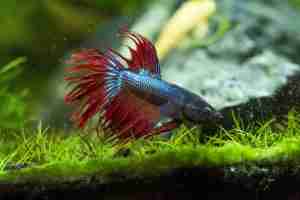 There are many misconceptions regarding how often you should feed a betta fish. The most common one is that bettas only need to be fed once a week.

This is not true. In fact, bettas should be fed 2-3 times a day. Each meal should be small, as bettas have small stomachs.

The amount of food depends on the size of your betta, as well as the type of food you’re feeding them. A good rule of thumb is to give them enough food so that they can eat it all in 2 minutes.

Here’s how much food you can give them depending on the type of food:

How Long Can Betta Fish Go Without Food?

If you’re going on vacation, you don’t need to worry about your betta fish potentially starving at home.

Bettas can go up to 2 weeks without food, as long as they are completely healthy and have no underlying health problems.

If you have a sick betta fish, it’s best to ask your veterinarian exactly how long they can go without food.

Additionally, if you want to avoid having this problem in the first place, you can also buy automatic feeders that will dispense food to your betta fish at regular intervals while you’re away.

One example is the Fish Mate F14 Aquarium Fish Feeder which can feed different types of fish food up to 4 times a day. It’s powered by a quartz battery, so you can be sure that it won’t run out of juice while you’re still on vacation.

What Do Betta Fish Eat In The Wild?

In the wild, betta fish eat a variety of different foods. They typically eat small insects, crustaceans, and larvae. However, they will also eat plant matter if it’s available.

Here are some of the most common food items that bettas eat in the wild:

Betta fish will eat a variety of different insects, including flies, mosquitoes, and moths. Usually, bettas will get these insects when they fall to the surface of the water. Bettas also jump pretty well, so if these insects just happen to be flying low enough, they’ll snag them out of the air.

Betta fish will also eat small crustaceans that they can fit into their mouths, such as shrimp, crabs, and crayfish. These crustaceans are typically found in freshwater ponds, streams, and rivers.

Betta fish will also eat larvae. The most common type of larvae that bettas eat is mosquito larvae. These larvae are typically found near the surface of the water. Some pet owners, however, choose to feed their bettas black fly larvae as well.

While not as common, betta fish will also eat plant matter if it’s available. The most common type of plant matter that bettas eat is algae. This will only happen if there’s not enough other food available, though.

Betta fish are also known to eat the occasional piece of fruit that falls into the water. This is most likely because they mistake it for insects.

To sum things up, betta fish, especially those in the wild, are not picky eaters. They will pretty much eat anything that they can fit into their mouths. 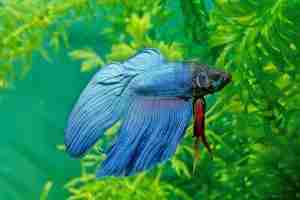 Now you know the variety of things that bettas can eat, as well as not eat.

Here are some tips to keep in mind when feeding your betta fish.

Betta fish shouldn’t be given carrots to eat. Carrots are high in sugar and can cause bloating in bettas.

Bettas can eat fruit, including watermelon, strawberries, and cantaloupe. However, fruit should only be given in moderation as it is high in sugar. Additionally, bettas shouldn’t be given citrus fruits because those are too acidic for them.

Most fish, including bettas, can eat tiny amounts of bread that are soaked and sliced. However, it’s not the best for them and should only be given in moderation. Bread is high in carbohydrates, which can be bad for bettas. Additionally, bread may cause bloating.

Bettas can eat cooked rice, but it should only be given in moderation. Just like bread, rice is also high in carbohydrates. Too much of it can have negative effects on your betta fish.

Bettas can eat broccoli, but it should only be given in moderation. Broccoli is high in calcium, which can be good for bettas. However, too much calcium can lead to health problems like kidney stones.

What is the best food for betta fish?

There is no one “best” food for betta fish. Instead, it’s important to give them a variety of different foods so they can get all the nutrients they need. This includes things like protein, fat, carbohydrates, vitamins, and minerals.

As you can see, there are a variety of things that betta fish can and cannot eat, including different types of human food. It’s important to give them plenty of different foods so they can get all the nutrients they need to thrive and be healthy. Additionally, don’t over or underfeed them, and make sure to have a designated feeding area.

Now that you know whether betta fish can eat human food or not, you can make sure to give them the best diet possible!