Red hook silver dollar fish have an awesome reputation among fishkeepers, as a go-to choice for a low-maintenance fish that does extremely well in community tanks.

They have a unique and mesmerizing appearance, which stands out permanently, as they tend to occupy the middle and top areas of an aquarium.

These fish thrive in freshwater heavily planted tanks, with plenty of refuge areas and in the company of other large peaceful species.

When you take into account the silver dollar fish lifespan, its easy care is a definite plus. They typically live 10 years, with some individuals surpassing that age by a year or two if they’re winners of the gene lottery.

This guide aims to answer all your questions about the red hook silver dollar fish, so you can confidently include these popular rapid swimming beauties into your tank! 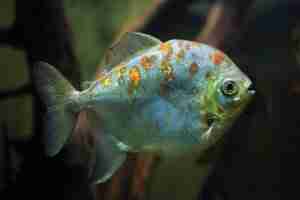 Previously known to belong to the Characidae family, and the Serrasalminae subfamily, it has now joined 90 other species in the newly elevated to family status Serrasalmidae.

The distinctive feature of this family is the serrated keel running along their belly.

These awesome fish are commonly found in the rivers of South America, from Ecuador, Venezuela and Colombia, to Peru and Brazil.

The silver dollar fish prospers in the generous amounts of long vegetation found in the Amazon and Rio Orinoco. Their tall and thin shape makes it easy for them to navigate heavily planted freshwater areas.

Aquarists often refer to them as “plant piranhas,” and for a good reason! A school of silver dollar fish will devour most plants.

Keep that in mind when planning your tank’s setup, as you’ll need to include elements that mimic the rocks and driftwood found in the red hook silver dollars’ natural habitat.

The biggest appeal of these fish is their fast swimming and schooling behavior. This visual perk can give any tank a lively and animated feel.

Silver dollars are an excellent pick if you’re new to larger tanks. When mature, these fish can grow to lengths of over 10 inches. Their low-maintenance nature will ease you into the logistics of maintaining a bigger tank.

There are only a few types of silver dollars that you can find for sale:

You can find these fish for sale in sizes ranging from small to extra-large. However, size isn’t a good indicator of the age of your new tank inhabitants.

The red hook silver dollar has a relatively slow growth rate, and its maximum size can vary a lot depending on the individual.

The average silver dollar fish lifespan is ten years. But there have been reports of some individuals making it 1 or 2 years longer than their 10-year-old mates. A good set of genes and the ideal habitat are usually the key elements behind this rare occurrence.

These fish are a robust and strong species, primarily due to the rough nature of their natural habitat. This can only be good news for you as an aquarist!

The optimal water pH level, water hardness, and temperature fall within larger ranges than those of most freshwater fish. This means you can have happy and healthy silver dollar fish inhabiting your tank without micromanaging the water conditions.

The red hook silver dollar fish may be a slow grower, but once fully developed to their large adult size, it’s quite a fascinating view!

This fish has a pretty literal connection to its name. It resembles a silver dollar, with an almost perfectly circular side-view, and a shiny appearance, which turns nearly translucent at fin level.

Some of the easily identifiable features of the red hook silver dollar fish are:

The red hook silver dollar fish max size is commonly known to be 10 inches, but on average, the length of a mature fish ranges between 6-8 inches.

They are by no means small fish, which makes them ideal if it’s your first time setting up a larger tank! When planning the tank setup of your new silver dollars, keep in mind that they are as long as they are tall, and they are active.

These fish need space to develop to their max size, to practice their schooling behavior, and to swim freely. So plan accordingly! 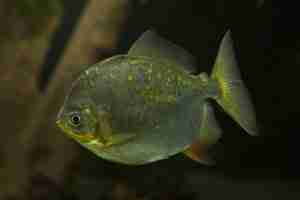 There are a few things you should consider when planning to introduce red hook silver dollar fish to a community tank:

These fish are known to inhabit the slow-moving parts of a river, thriving in the areas where overhanging and marginal plants are abundant.

Your silver dollar fish will benefit greatly if you replicate the “blackwater” environment found along the rivers they’re native to.

You can do this by adding decorative elements that imitate rocks and driftwood, as well as naturally decomposing Indian almond leaves.

The “plant piranha” is categorized as an omnivorous species, but the silver dollars’ herbivorous desires are definitely something you’ll want to take into account when setting up your tank.

The tank needs to be heavily planted, with plenty of free space for rapid-paced swimming. You only need gentle water movement to keep red hook silver dollar fish comfortable.

Go for sturdy plants, and plan to replace them on a regular basis. If this becomes too much of a hassle, you can always introduce some artificial plants as an alternative.

Fabric and silk-like fake plants will give you a realistic aesthetic without compromising on the silver dollars’ need to find refuge among the plants.

Speaking of refuge, these fish are a shy and nervous bunch!

Lots of plant coverage, dim lights, and plenty of places to hide are must-haves for your silver dollar fish. As they mature and solidify their schooling behavior, this type of tank setup is guaranteed to boost their confidence to swim in the open areas of the tank.

Red hook silver dollar fish tend to spend the majority of their time between the middle and the upper part of the tank.

The rare occasion that makes them venture below these areas are when breeding and laying eggs. And even then, it’s a one-time deal.

Why is this important to your tank setup?

Because you will want (and need) a securely-fitting aquarium lid! These fish will jump out of the water. Be it because of nature’s drive or during feedings; you don’t want a 10-inch mature silver dollar escaping!

You might be wondering if a fish species known as “plant piranhas” has anything other than plants on the menu. And surprisingly, they do!

These fish are omnivores but with a strong herbivorous drive. They will eat smaller fish that are bite-sized compared to their size and will appreciate the occasional brine shrimp or bloodworm and other invertebrates.

They will accept frozen or prepared commercial aquarium food.

But if you really want to spoil your silver dollars, here is a list of their favorite plant-based food:

Red hook silver dollars are schooling fish, which means you won’t see much individuality shining through. They are a gorgeous bunch, nonetheless!

Although they are timid and anxious, they find confidence in larger numbers. That is one of the reasons why it’s typically recommended that you house at least 5 red hook silver dollar fish in the same tank.

They are generally a non-aggressive and peaceful species that do well in community tanks, especially when joined by other large and non-confrontational species.

The only type of behavior you have to worry about is red hooks mistaking much smaller fish for snacks. A prime reason why you should avoid pairing the red hook silver dollar with small or aggressive species.

When given plenty of open space for swimming, with multiple refuge spots available, a school of red hook silver dollars will primarily occupy the upper part of the aquarium.

Silver dollar fish are a fairly active species when you meet the needs of their temperament!

Here’s an easy guide to help you map out potential tank mates for your school of red hook silver dollars:

Tank mates that you should definitely consider for your red hook silver dollar fish:

Breeding red hook silver dollar fish can seem like a daunting adventure, but it all boils down to setting yourself up for success.

Here are the 4 steps to take for the successful breeding of silver dollar fish:

Successful red hook silver dollar breeders report that having a peat-filtered aquarium makes a huge difference in optimizing your tank’s water in preparation for breeding. So, it is worth looking into this filtering method well ahead of time.

Another thing you can do in advance is to home at least six red hook silver fish in the same tank and give them plenty of time to figure out their tank mates’ sex. This innate knowledge will drive them to confidently get down to business when it comes to breeding.

You can also get your tank ready for breeding season by introducing fine plants, such as Java Moss or Cabomba. These aquatic refuge areas will make it easy for the red hook silver dollar female to lay her eggs, ready to be fertilized.

A female will lay up to 2,000 eggs, and she will scatter them on plants in the lower part of the tank.

Some will fall through, so it’s recommended that you try outbreeding in a tank that has dime-sized marbles as the substrate. This way the eggs can fall to the bottom of the tank and be hidden from the access of mature fish.

Either way, you’ll need to move the eggs of red hook silver dollar fish away from the community tank because they will get eaten once laid.

Once your new red hook silver dollars reach a decent size (when they can’t be mistaken for food!), it’s time to reintroduce them to the community tank.

Keep an eye out for signs of white spot disease, or other signs of illness, after the move. A swift change in water temperature can trigger ailments in juvenile fish.

The red hook silver dollar fish is as low-maintenance as freshwater fish can come.

With a unique figure and fascinating color, they will give your tank a lively vibe for years.

Just be sure to fulfill their craving for plant-based goodies!