Interested in knowing more about kuhli loach tank mates? This guide has you covered! 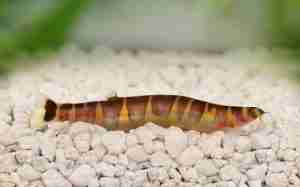 Kuhli loaches (Pangio kuhlii) are adorable, peaceful fish. They are sometimes called the Coolie Loach or the Leopard Loach. They kinda look like tiny, scavenging eels – however, they are not true eels due to having pelvic fins. They are nocturnal fish that spend most of the daylight hours quietly hiding, while at night they are much more active.

Kuhli Loaches are known for being quite reclusive when they are left alone. While they are not a schooling species, they are known as shoaling fish and tend to do very well with at least 4 or more other members of their own species. They are much happier and more active this way. However, you may want to build an aquarium community with multiple different species.

As mentioned earlier, Kuhli Loaches are very mellow fish. So, if building a multiple-species tank, you should consider adding other non-aggressive fish – these are the best Kuhli Loach tank mates.

In particular, Kuhli Loaches tend to do very well with peaceful fish that occupy the middle to upper sections of the tank. This is because Kuhli Loaches spend the majority of the time scavenging for food at the bottom of the tank.

In this article, we will be going over 8 of the best Kuhli Loach tank mates, in no particular order. 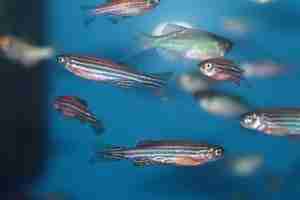 Zebrafish, also known as the Zebra Danios, are extremely popular freshwater fish. They are quite small and only grow up to about 2 inches.

As their common name implies, Zebrafish have black/dark blue stripes from head to caudal fin, with white coloration behind the stripes. However, it’s possible to also find variations in their appearance – some are completely gold in color, and others are able to glow many different colors due to genetic modifications.

Zebrafish are known to be playful, social fish. As with Kuhli Loaches, they are shoaling fish and tend to do well with multiple members of their own species.

In general, they don’t do well on their own and tend to get very stressed when they’re alone. So, it’s best to keep a minimum of 5 other members. Otherwise, if kept on their own, they can develop illnesses and be aggressive to other species in the tank.

Why Zebrafish Are Good Tank Mates

Neon Tetras are another very popular freshwater fish. They are relatively small and only grow to about 3.5 centimeters. They are quite a colorful species. Their appearance is a silvery color with a long, blue stripe partially covering the top half and a red stripe covering the middle of the body to the tail on the lower half.

Neon tetras are very peaceful fish. They tend to keep to themselves and can’t really hurt their tank mates due to their tiny size. They can be quite skittish and shy when they first settle into their new tank, but after a couple of weeks, they will be much more active.

Their quality of life is highest when there is a minimum of at least 5 other neon tetras because they are known as schooling fish. As with Zebrafish and Kuhli Loaches, they can get very stressed and develop illnesses when they are left alone.

They make great Kuhli Loach tank mates because of their peaceful temperament and lack of aggression if kept in a school (remember to make sure to have a least 5 other Neon Tetras to prevent aggressive behavior). Due to their peaceful nature, they are a very beginner-friendly species. 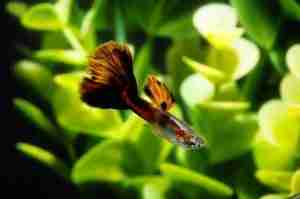 Guppy fish are popular fish that are easy to care for. Due to selective breeding, they have many different appearances. They come in any color you could think of, from dark purple to bright yellow. They also can come in many different patterns (spots, stripes, etc).

In addition, guppies can differ from each other in their tail fin shapes – one guppy may have a large, fan-shaped tail, while another may have a completely rounded tail. These examples are just a few of many – the fact that there are so many variations in guppy appearance makes them a very popular freshwater fish.

As you may have guessed from the previous fish species mentioned, guppies are generally very peaceful fish. They like to be kept in groups, so if you plan on keeping guppies, it’s best to have at least 5 in total. Otherwise, if not kept in a group, you can expect to find them looking for hiding places or falling ill.

They are almost constantly swimming and are quite active, but generally don’t try to harm or fight other species. They usually hang out around the middle to upper layers of the tank, but they are known to move anywhere.

Why Guppies Are Good Tank Mates

Guppies are great Kuhli Loach tank mates because they are easy-going fish despite being very active. They won’t actively try to harm Kuhli Loaches or other species unless they are provoked. 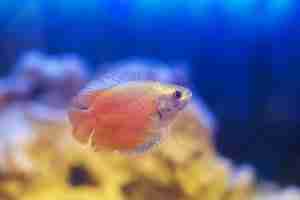 Dwarf Gourami fish are tropical freshwater fish that come in a large number of color varieties, from bright orange to electric blue. Because of this, Dwarf Gourami are very beautiful and popular fish that add any desired color to an aquarium. They are known to grow to approximately 4 inches.

Dwarf Gourami are very hardy fish that are peaceful in nature. This makes them a great fish to add to most fish tanks. These are schooling fish, so it is a good idea to have at least four or 5 other Dwarf Gourami with them.

The males tend to be very competitive with each other, so it is recommended to have no more than one male Dwarf Gourami, with the rest being female.

They are very mellow and slow-moving. You can expect to find them occupying the middle to top layers of the aquarium in a group, although they sometimes move to the bottom layer as well.

Dwarf Gourami are very mild-mannered and don’t bully other species of fish unless there is another male of the same species present in the tank. They can be very good Kuhli Loach tank mates due to their peaceful temperament. 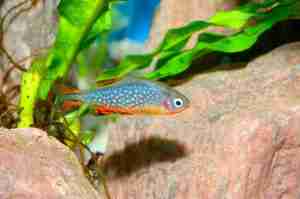 Celestial Pearl Danios, also commonly known as the Galaxy Rasbora, are pretty and tiny fish that have black bodies with vibrant orange fins. They are covered with many silvery-white spots. Combined with their black bodies, these spots make them resemble the night sky. These freshwater fish only grow to about 1 inch.

Celestial Pearl Danios are peaceful by nature, albeit a little shy. However, they tend to do very well with other species that are known to be peaceful, such as the other species entries in this article.

They are schooling fish, so it is best to keep them with at least 5 other members of their own species. It is recommended to have a ratio of at least two females for every male in order to lower the chance of aggressive behavior between males. You can expect Celestial Pearl Danios to occupy the lower levels of the tank.

In addition, both species are peaceful, so the chance of them fighting is very low. Due to the temperament of both species, Celestial Pearl Danios are great tank mates for Kuhli Loaches.

Chili Rasboras, also commonly known as mosquito rasboras, are extremely tiny fish that only grow up to about 0.7 inches. They are mostly red in color aside from a long and metallic-blue stripe that runs from their opercula to their caudal fin. The contrast of the reddish body with the blue stripe gives them a striking appearance. They also have silvery-white bellies.

Chili Rasbora is another peaceful species that are relatively gentle. They are also schooling fish, so remember to keep about 5 or 6 other members of their own species present in the tank. Otherwise, they may become stressed and fall ill. They are a hardy species that tend to do well in most tanks. You can often find them schooling together in the middle level of the aquarium.

Chili Rasbora work very well with almost all other species that have peaceful temperaments. They can coexist with any of the species mentioned in this article, with Kuhli Loaches being no exception. The chance of Chili Rasbora fighting with other species is nearly 0%. For these reasons, they are excellent Kuhli Loach tank mates. 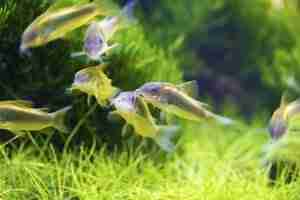 Corys are very friendly and cute freshwater catfish with little barbels that look like whiskers. They grow up to 2.5 inches. They are known to come in several different morphs, including bronze, green, and black. Out of all of the different Corydoras species, Bronze Corys are among the most popular among fishkeeping enthusiasts.

Bronze Corys are friendly fish that do well in many conditions. But, like the other species in this list, they tend to do better in schools of at least 3 others. They are very social yet peaceful fish.

You can expect to find them very close to other members of their species, swimming around the bottom layer of the aquarium while searching for things to eat (pretty much anything small and soft enough to fit in their mouths.

They occupy the bottom of the tank like Kuhli Loaches, but they are not known to be aggressive. In addition, they are a bit smaller than Kuhli Loaches (about 1.5 inches smaller) and so they don’t pose much of a threat. Due to their small size and the fact that both species are very mellow in nature, Bronze Corys are great Kuhli Loach tank mates.

Here is the final entry in this article – Red Cherry Shrimp. Yes, as you may have guessed, they are not fish. However, these crustaceans are worth the mention. They are known to grow to about 1.6 inches, with the females being a little larger than the males. They are mostly red in color, but their legs are usually clear.

Red Cherry Shrimp are hardy invertebrates. They are peaceful yet shy crustaceans that tend to do very well in aquariums with many plants in them, as these provide them with a sense of safety in case they want to hide.

If you decide to add Red Cherry Shrimp to your aquarium, you should also add some java moss – this is because the shrimp use the moss to groom themselves. They tend to spend most of their time around the plants, feeding on algae and any plant debris.

Red Cherry shrimp are very mellow and do not pose any threat to fish – this is because they don’t really have a way to defend themselves. That’s why having plants in the tank is important – they provide good hiding spots for them. It’s also important to keep them with fish that are non-aggressive and peaceful, such as the species mentioned in this article. Red Cherry Shrimp are good Kuhli Loach tank mates because they don’t bother them at all.

The best tank mates for Kuhli Loaches are other members of their own species. However, keeping an aquarium with only one species would be boring! Fortunately, Kuhli Loaches can coexist with many different species, as long as they are all peaceful in nature.

This temperament applies to each species mentioned in this article: Zebrafish, Neon Tetras, Guppies, Dwarf Gouramis, Celestial Pearl Danios, Chili Rasbora, Bronze Corys, and Red Cherry Shrimp. They all add a ton of color and vibrancy to your freshwater tank. Due to their extremely low levels of aggression toward other fish, all of these wonderful creatures are ideal for beginners.