Cory Catfish are among the most popular freshwater bottom dwellers in the world. There is a huge number of variations and colors, and aquarium owners simply love to keep them. In this article, we will talk about how often Cory Catfish lay eggs and how to encourage reproduction. If this is something you are interested in, then keep on reading!

What Are Cory Catfish? 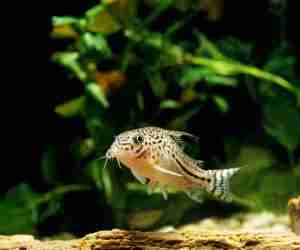 Cory Catfish (Corydoras), also known as Cory Cats and Armored Catfish, is a genus of catfish originating from South America where they can be found in small streams, marshes, ponds, and the margins of rivers.

They prefer slow-moving waters that are shallow and murky. As they are bottom dwellers, they prefer spending their time in sand and soft gravel, searching for food and playing by burying themselves in it. They also prefer dense vegetation and lots of hiding places because they like to hide.

When it comes to their temperament, they are peaceful, friendly, and fun to watch. Everyone finds them endearing, both because of their behavior and cute looks. They get along with everyone but should not be kept with territorial and aggressive species such as Cichlids.

Also, remember that Cories are social fish, and you should keep them in groups of 5 minimum. They will feel safer, and you will be able to witness their true nature when they are together.

They enjoy fast water flow as they can be seen dancing in it, so make sure to have a filter of good quality and enough plants, wood, and stones for them to rest and hide.

A Cory will live up to 15 years if kept in proper conditions and if the fish has good genetics. There are even cases of Cories living for 20+ years! In the wild, they usually live up to 7 years.

Their size usually ranges from 1.5 to 2.5 inches (4-7 cm), depending on the species. The females tend to be bigger than males, though.

Cories are generally easy to care for and hardy species, but that does not mean you should not care about their needs. For 5 Cories, you should have a tank of a minimum of 20 gallons (75 liters).

They are sensitive to ammonia, nitrite, and nitrate, which can be silent killers, so make sure to regulate and check the parameters often.

Since they are bottom feeders, they are omnivorous scavengers. However, never assume they would get fed if left to feed only on scraps that fall to the bottom.

Make sure to throw in food for them specifically as well; a diet should be both based on plants and meat.

You can feed them flake foods but also homemade. Just make sure you do not overfeed them as the leftover food will raise the levels of ammonia, nitrite, and nitrate, which are deadly for these fish.

There are over 160 different Cory Catfish species. That’s quite a lot! While all of them are special in their own ways, we will only mention a few of the most popular species here. The most common species of Cory Catfish are the following: 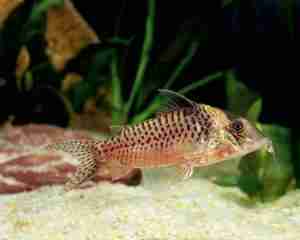 If you have six Cory Catfish in your tank, then it will probably take 7 days for each female to lay eggs, considering that all other parameters are met.

How Many Eggs Do Cory Catfish Lay?

How To Tell If Cory Catfish Eggs Are Fertilized

Fertile eggs look beige in color, and they tend to develop a darker spot in the middle as the hatching nears. As long as the eggs do not develop fungus, the fry will most likely hatch successfully. Infertile eggs look plain, white, or translucent.

How to Tell the Difference between Male and Female Cory Catfish

In order for your Cories to breed, you will need a mix of males and females. There should be two males per female ideally.

Males tend to be slender, thin, and smaller than females. Their midsection is also thicker, and they like to sit higher off the bottom. However, this can’t be really determined until they reach maturity, so determining the sex while they are small is impossible.

The best way is to simply buy a group of Cories, and there should be males.

If you’d like to see an in-depth video on how to breed Corydora Catfish, watch this!

In order for your Cory to successfully breed, you will have to get the right setup. The first step would be to get a separate breeding tank. That tank will be bare so it can be cleared easily.

You will then remove the breeding group from the main tank and put them into the new one, encouraging them to reproduce. Once the fry has spawned, you should return the parents back to the main tank, just in case they do not eat their own babies, which happens sometimes.

As for the setup of dedicated tanks, all you need is a small tank, a sponge filter, and a heater. Transfer the bacteria from the main tank into the new one so you can skip the whole cycling process. Do not get tempted to decorate the new tank because you will sabotage the whole process.

How can you condition your Catfish to spawn? Easily – make them happy. Make sure they are stress-free, that they eat good food high in protein, and try adding live food as well.

There is a trick you can do to encourage Cories to spawn in case they need a bit of encouragement – make a water change (25-50%) with water that is a few degrees colder. This will simulate a summer rainfall, which is the season in the wild when Cories breed.

It might take up to a few days, and when females lay eggs, they will do it on the walls of the tank and plants.

If you went for the second strategy and allowed your Cories to breed in the main tank, now you will have to get the eggs as fast as possible to the new tank. You can do that by using your finger or an old credit card and gently scraping it off the walls.

If the eggs are on plants or ornaments, you can take them whole and move them to the new tank. Also, if you notice any infertile eggs, remove them as they are probably developing fungus and will contaminate the rest.

The eggs hatch in 3 to 6 days. For the first few days, they will feed off their egg sack attached to their bodies. Once they start swimming, you should start feeding them the food designed for the fry specifically, such as New Life Spectrum Fry Food. Once they grow up more, you can switch them to adult fish food.

To sum up the settings for a breeding tank (and place where the fry will live): 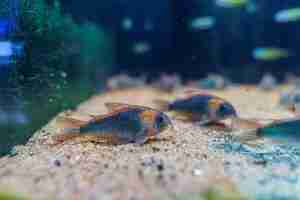 Once the fry has hatched and you have moved the parents back to the main tank, it is time to think about what to feed them and how to raise them in general. They will be very small, so you will have to feed them really small amounts of food.

You can feed them small amounts of newly hatched brine shrimp several times per day. If you do not know how to hatch brine shrimp, it is very easy, and you start the process two days after the Cory eggs are incubated.

After a week, you can start feeding the fry with crushed flake food or even with live brine shrimp, if you have them. You can also feed them with daphnia and micro worms. It is also very important to keep the water clean and never overfeed the fry.

As the fry are tiny, you won’t be able to siphon the water, so just take a cup and remove some of the water daily. Replace it with the water from the main tank.

Let’s check out some of the most common Cory Catfish diseases, treatments, and diagnosis for both adult and baby fish.

Infections from bacteria are the most common diseases, not only for Cory Catfish, but aquarium fish in general. Bacteria thrive in bad conditions, which means if your tank’s temperature and water parameters are not stable – then your fish will get infected.

The most common signs are the fading colors and bloated bodies, cloudy eyes, sores, bulging eyes, red streaks, and inflammation. Some fish even have difficulty with breathing. If caught on early, medication will be enough to battle infections.

Infections from fungi are also another type of common disease and also a result of bad conditions. The affected fish tend to dart around nervously, and they also scratch against the walls and wood.

Tufts on their skin, eyes, and mouth might appear too. It is very dangerous to let fungus appear on the eggs, so take care of all the conditions.

Infections from parasites are the third most common infections, and also another result of bad conditions and ammonia spikes. The affected fish are not as active as before. They lose their appetite and produce excessive mucus on their bodies.

They also might experience heavy breathing and scratch themselves against walls and wood. You might even notice visible spots of worms. If caught early, medication can help a lot.

To sum up, we have talked about the Cory Catfish basics and focused on their reproduction. There are two strategies to implement if you want successful breeding, which is not very difficult, even for beginners.

Make sure to provide your Cories with good food and a stress-free environment so they can breed and later spawn the fry.

Have you ever bred Cory Catfish? If not, would you like to try it? Thanks for reading!