How Many Platies In A 10 Gallon Tank Can You Keep?

Platies (Xiphophorus) are some of the best starter aquarium fish for beginners in the fishkeeping hobby. Finding out how many platies in a 10 gallon tank you can keep or how to care for these feisty freshwater fish is a good place to start.

Platy fish come in a countless variety of colorations and patterns. With different breeds getting interbred by aquarists to create awe-striking hybrid platies, they truly are a species that come in as many colors as the color spectrum allows.

Platies are an easy-to-care-for species with great potential for living in a community tank, thanks to their peaceful temperament.

What factors go into deciding how many platies to keep in a 10-gallon tank?

A 10 gallon tank is big enough for a group of 5 adult platies to live in and enjoy a healthy habitat.

Here’s how that number of gallons changes, in correlation with how many platy fish you plan on adding:

What Happens If You Put Too Many Platies In A Tank?

Platies will spend most daylight hours swimming in the middle part of a tank, favoring aquatic plants and décor elements to hide and explore.

Although they don’t engage in a typical schooling behavior, platy fish love living in small groups. It has more to do with their social nature than anything else.

That doesn’t mean you can’t have too many platies in a tank. Quite the contrary!

Here are some of the potential downfalls of having an excess number of platies living in the same tank:

If your tank’s capacity (in gallons) is too small for the number of platies inhabiting it, chemical imbalances are likely to happen.

This means you’ll have to put more effort into aquarium maintenance, cleaning the filtration system, and monitoring water parameters.

Having too many platies in a tank puts more work on the table for you as a fishkeeper.

With how quickly platies can reproduce, you’ll have a hard time managing the male-to-female ratio in a community tank where there are too many platy fish.

Having too many male platies in a tank with just a few females is a recipe for disaster. Female platy fish will quickly become overwhelmed by the constant harassment of their male partners.

Starting out with a small group of platies, even in a larger tank, is preferred if you’re looking to breed platy fish. Overpopulating a tank can happen effortlessly, considering how proficient platies are at breeding.

How Does The Ideal Number Of Platies Change Depending On Their Tank Mates?

Platy fish are a peaceful bunch and highly compatible with other similarly sized fish.

There are only three factors that can influence the number of platies you can keep when sharing a tank with other tank mates: 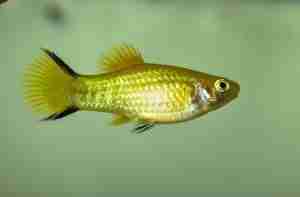 “Platies” is an umbrella term used among aquarists, and it refers to three base species of platy fish:

The various types of platies available for sale nowadays are interbred hybrids of these 3 platy fish species. They have been mixed to create new (and stunning!) colors, patterns, and fin shapes.

The Southern Platy and the Variable Platy are the species that most fishkeepers have in their aquariums. These two types of platies have been heavily interbred, to the point where it’s hard to accurately distinguish between the endless list of hybrids created.

Click here to see just a few of the unique pattern-tail shape variations that platy fish can come in.

Similarities Between Various Types Of Platies

Are all platy fish species the same?

Well, no. But, Southern Platies, Variable Platies, and Swordtail Platies have a bunch of things in common:

Every platy variation is resilient to a wide range of water parameters and easy-to-care-for with the most basic tank-maintenance routine.

Even though platies are robust fish, all 3 base species live a relatively short life, with most averaging somewhere at around 3 years.

All platy species sold nowadays have wildly different colorations, patterns, and fin-shapes when compared to platy fish living in the wild.

Like most fish from the Poeciliidae family, all platies are excellent starter fish for novice aquarists.

Platies, of all three types, are ridiculously easy to breed in captivity. It’s common for fishkeepers to have more problems with stopping platy fish from overpopulating a tank than they do when trying to breed them.

Differences Between Various Types Of Platies 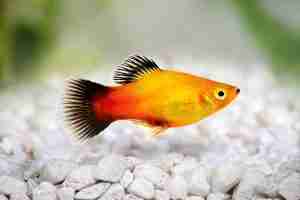 Knowing that they are interbred to the point of it being almost impossible to distinguish between Southern Platies, Variable Platies, and Swordtail Platies, one question pops up:

What sets the 3 different types of platies apart?

Southern platies and Variable platies are extremely easy to find for sale in the aquarium hobby, whereas Swordtail platies are rare varieties.

The Swordtail platy is also known as the Spike-Tail platy, with a distinct fin shape, which is the most sought-after variety of platy fish.

The Southern platy was first introduced in captivity in 1907, sometimes going by the name of “Common Platy”.

The Swordtail platy came second, entering the fishkeeping hobby in 1909.

The Variable platy was introduced not much later, in 1932.

The Southern platy and the Variable platy share the common physical trait of having short and sturdy figures, missing the distinct sword-like fin of the Swordtail platy.

There are negligible size differences between female Southern platies (growing to a max length of 2 ½ inches) and female Variable platies (that grow to up to 3 inches).

In all three types of platies, males tend to be smaller than their female counterparts.

Now that you know how many platies you can keep in a 10-gallon tank, it’s time to figure out the ideal male-to-female ratio of platy fish in an aquarium.

Male platies will relentlessly pursue females in order to mate. This means that not having enough females per male platy fish will put the existing females at risk of overwhelming harassment.

For a group of 5 adult platy fish, in a 10 gallon tank, the best ratio is 4 female platies to 1 male platy.

How To Care For Baby Platies If Two Platies Breed?

Platy fish are livebearers, which means they give birth to swimming fry.

This is part of the reason why platies are so easy to breed.

Spawning, egg-laying, egg-fertilization, and protecting the fertilized eggs are stages you get to skip when breeding platy fish.

If you want to learn how to care for baby platies if two adult platies breed, you have to know that your main goal will be to protect platy fish fry from the greedy adults looking for a snack.

You can achieve this goal in two different ways:

Not all juveniles will survive the gluttonous appetite of their adult tank mates, but at least some will reach adulthood by using aquatic plants as cover.

This is a better long-term solution if you want the most platy fish fry to make it to adulthood.

By moving pregnant female platy into a breeding box, you can easily keep other fish away.

You need to remove the female after it’s done giving birth. The platy fish fry should be moved into another tank, where you can keep them until they grow to a minimum length of 1 inch.

Instinctually hiding in the heavily planted area of a tank, the fry will feed mostly on algae and periphyton. They will also start feeding on leftover fish food once they reach a certain size.

See an example of a platy fish life cycle in captivity here:

Platies share the Xiphophorus genus with guppies, mollies, and swordfish. The similar trait they share is described by their genus, which names them “sword carriers”.

Their superb colors, patterns, and fin shapes are worth every bit of effort that goes into their care!

Platies are native to Mexico, North America, and Central America.

In the wild, their distinct rainbow-like coloration isn’t common at all. Breeding in captivity has unintentionally turned the naturally olive-green platy into a designer fish.

Platies naturally prefer hard alkaline waters, but with most platy fish being bred and raised in captivity, this preference was replaced with resilience to most water conditions.

Platies are small sideways-flat fish that sport small fins. Their fins come in as many shapes as colors.

Cross-breeding between different Southern, Variable, and Swordtail platies has resulted in the platy fish becoming a trend-setter of diversity, as far as looks go.

Hybrid platies with the most popular patterns are:

Platies don’t need elaborate aquascaping to thrive, so your tank setup can be pretty basic, as long as your aquarium is heavily planted.

Giving your platy fish plenty of aquatic plants to wander through can make the max number of platies in a 10 gallon tank be more flexible.

Platy fish rarely interact with the bottom of a tank, which means substrate is optional but recommended for establishing the vegetation in your aquarium.

Take into account their need for open spaces for swimming when setting up a tank for your platies.

Having too many platies in a tank can negatively impact the chemical balance of the water and make it harder for you to manage the upkeep of their aquarium.

Go by the guidelines above (5 adult platies in a 10 gallon tank), and these water parameters should keep your platy fish comfortable and healthy:

Platies have relatively short lifespans, with most individuals of this species averaging a lifespan of 2 to 3 years. Optimal care in captivity might extend that timeframe to 5 years at best.

A stress-free life, living in a small group with the perfect male-to-female ratio, can positively influence the length of their lifespans.

Omnivores by nature, platies will feed on algae, insects, larvae, fish fry, and fish eggs in the wild.

In captivity, they’re far from being picky eaters. You can feed them a varied diet of frozen/freeze-dried live foods (like artemia or daphnia), flakes, micro-pellets, spirulina, and kelp. To add protein, include bloodworms, brine shrimp, and mosquito larvae into their diet.

Being greedy eaters, platies in larger numbers will cause a stressful frenzy while eating. Another reason to limit the number of platy fish you have sharing a tank!

Simply put, you hardly need to try to breed platies!

They will do all the work as long as their very basic care requirements are met.

Platy fish are livebearers, giving birth to swimming fry that will take refuge in your tanks’ vegetation to avoid being eaten by adult platies.

Females can give birth to up to 50 fish fry at a time and will do so every 4 to 5 weeks.

Telling male platies apart from their female partners is easy.

Platies are peaceful fish that have an easy time adapting to a community tank.

There are few fish that you should avoid pairing with platies:

Conclusion – How Many Platies In A 10 Gallon Tank Can You Keep? 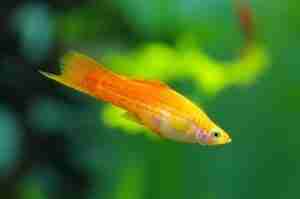 Platies are hardy, low-maintenance fish, thriving when kept in small groups of 5 adults in a 10-gallon tank.

You don’t need a complex aquarium setup to keep platies content, as they will happily dart from one end of the tank to the other for hours on end.

Give them enough open space to swim, and platy fish will put on a show in every color of the rainbow!