Skip to content
DISCLOSURE: This post may contain affiliate links. As an Amazon Associate I receive a commission if you decide to purchase through my links. This at no extra cost to you.

How Long Do Mollies Live?

The Molly fish is one of the most known and popular freshwater fish species. Even if you are a beginner when it comes to fish keeping, you have seen or heard about this fish. In this article, we will explore the basics of this species and the popular question – how long do they actually live? The short answer is that mollies live for about 5 years.

However, there are many factors that determine their lifespan such as diet, tank conditions, genetics, and so much more. These will be discussed in this article. Let’s find out more about the beautiful Molly fish! 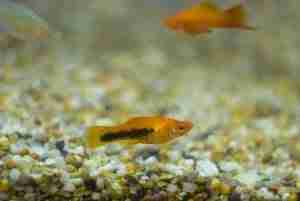 Molly (Poecilia sphenops) belongs to the category of livebearers called Poecilia, and it can also be called the short-finned molly or common molly. They are very popular freshwater tank species that come in a wide range of colors and also because they have a high growth size and reproduction rate.

Mollies originate from the freshwater streams in Mexico, but they were also found in marine waters and coastal brackish waters. The wild, original Mollies are of dull and silvery color, and they are generally hard and highly adaptable fish.

See the video below on all the different varieties of mollies!

The selective breeding over the years has produced 39 varieties of mollies, but we will mention only the most popular ones, which are the following:

Mollies are peaceful fish that are a great choice for beginners. Sometimes the males show the signs of aggression but only in crowded tanks or during the breeding time. They are very friendly and social fish that enjoy the company of other tank mates, as long as there is space for everyone.

If you are thinking about possible tank mates, then try out the following species:

All of these fish are friendly and peaceful. The ones you should avoid at any cost are Cichlids, because their nature is territorial and aggressive, depending on the breed.

Also, do not forget that Mollies like to stick together even though they are not a schooling breed. However, keep in mind that the group should consist of females mostly because males like to harass them, and the reason is reproduction.

Speaking of food, Mollies are not fussy, but they prefer a plant-based diet and algae. They love scraping the algae from the surfaces of tank walls, and they also enjoy lettuce, spinach, zucchini, and similar vegetables from the kitchen. You can try out homemade recipes if you would like to bring them even more variety in their diet. They also can eat dry food such as flakes and pellets.

Mollies are livebearers, meaning their eggs develop inside the female’s body in order for fry to be released live and ready to swim and feed immediately. This makes them the easiest fish species to breed, which is also the main reason for their popularity.

The reproduction is so easy that even beginners can breed them – you do not need an additional breeding tank because they will do it in the main one. However, you should know that both the parents and other tank mates will eat the fry, so try to separate them as soon as possible after they are released. 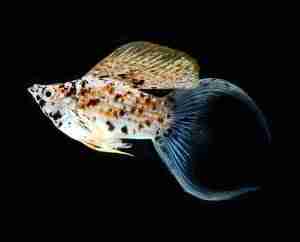 Even though Mollies are hardy fish, they are still susceptible to common diseases such as “shimmies”, the Molly disease which disables the fish from swimming properly. They can recover with proper treatment, and the cause is unstable temperature and ammonia spikes. They can also suffer from other common fish diseases, for example:

White Spots (Ich or Ick): when you notice white spots on your fish, then it is probably this common skin disease caused by a parasite. It is easy to cure as long as you notice it on time and easily buy medication for it. You will also notice that the affected fish tends to rub itself against the tank’s walls or wood, which is why it is called itch.

How to treat it? You should raise your tank’s temperature to 80 F and then add medication such as Seachem ParaGuard; the dosage can be seen on the label. The alternative is to add 1 teaspoon of salt into your tank. This should not be done for more than 7 days and after that, you should do a major water change. The results should be seen then.

Velvet: this disease is caused by another parasite called Oodinium, which attacks Molly’s skin and creates small golden cysts in it. If not caught early on, this disease is usually fatal because it spreads very quickly until the whole body of the fish is infected.

How to treat it? Try using copper medication because it has proven the most effective. You should also switch off the tank lights until the treatment is completed. After that, a major water change might be a good idea because it will eliminate any leftover parasites.

Fin and tail rot: this is either an infectious or bacterial disease that attacks the fish’s fin and tail. The fungus and bacteria in the tank can be a result of ammonia spikes and poor hygiene. Usually, a fish has an injured fin or tail during the bad conditions in the tank, and that is when the disease spreads.

How to treat it? Remove all affected fish and place them in another, smaller tank. Immediately start treating them with antibiotics (such as Maracyn, Maracyn 2, Tetracycline, or Seachem ParaGuard). If you do not want to use antibiotics, you could try medication for fungus. Also, do a major water change in the origin tank.

Protozoan: is a single-celled microscopic animal that can feed on fish in your tank and that can be found in bad water conditions. You can notice it when you see white specks on the skin of your fish, which also becomes lethargic and refuses to eat. Protozoan attaches itself to the skin and then slowly finds its way through the body and into the bloodstream.

How to treat it? You can prevent the disease by keeping the temperature stable in your tank. In the early stages, use medication such as Malachite Green or Formalin; and in advanced stages, copper medicine. After the treatment, do the major water change, and this should give results.

Mouth Fungus and Columnaris: this disease is an infection that is spread by a bacterium, and it might look similar to a fungal infection. You can notice it by white threads on the mouth or body of your fish. Sometimes the fish is breathing heavily and produces excess mucus. In advanced stages, sores might appear.

How to treat it? It is important to spot it early on. In that case, you should begin with antibiotic treatment (try Maracyn or Formalin). Every 3 days, add one teaspoon of salt into your aquarium. If the symptoms subside, then do a major water change. Some owners even put their fish in a dip solution of 10 mg per liter of potassium permanganate; however, you have to be careful with the dosage; otherwise, your fish might end up burned, and nobody wants to kill their fish, right?

How Long Do Mollies Live?

So, how long do mollies live? The lifespan is up to 5 years, depending on the overall conditions, genetics, diet, etc. Mollies are not considered to be a long-lived species, but the sensitivity depends on the breed of Molly as well. For example, inbred species such as Balloon Mollies tend to live a few years less, even though there are mixed opinions on this topic. 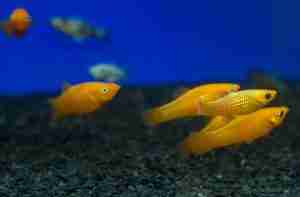 There are various factors that influence the lifespan of Molly, and we will explore them now in more detail.

Genetics is the primary factor and one of the biggest building blocks of lifespan in any living species. If your fish has bad genetics, then there is nothing you can do about it. In order to prevent buying a fish with bad genetics, make sure to find a reputable and reliable breeder who focuses on breeding healthy fish instead of on profit. Too much inbreeding and bad living conditions will destroy the health of many future generations of Mollies. It is no wonder that fish bought at pet stores live less than those from breeders or the wild.

A diet of good quality is another important factor. This applies not only to breeders but also to individual tank owners. Both will influence the lifespan of your fish. Mollies are omnivorous, but they do prefer plants and algae as that is their natural diet in the wild. If you go for dry food, choose only quality brands; but it is still recommended to introduce a variety in their diet, including homemade food and dry food. It is also important to not overfeed them; make sure there is no leftover food in the tank as that will make the water dirty and influence the parameters.

Speaking of water parameters, they are a crucial factor when it comes to lifespan. The conditions and parameters should always be stable and the following:

Try to perform as regular checks as you can and use a filter of good quality.

Mollies might be hardy fish, but they still can get stressed, and stress always leads to sickness. So make sure to provide a stress-free environment for them. That means that you should make them live with compatible tank mates, make an adequate male to female ratio, make enough space for everyone, provide hiding spaces, moderate lighting, and so on.

As for the lifespan related to sex, there isn’t any proper evidence that would show whether male fish live longer than female or vice versa. However, a female Molly who spawns constantly will probably have a shorter life span due to the physical stress, the same for a male Molly who would mate all the time. That is why it is important to make an adequate ratio of sexes and separate them from time to time so they can rest.

To conclude, we have talked about the basic specifics of Molly fish and about their lifespan. We have also talked about how to ensure they live longer, which factors come to play, and how to make your Molly fish happy and healthy in general.

Mollies might be considered hardy and easy fish, but that does not mean they do not deserve as much love and care as some other, more sensitive species. They deserve all the love they can get; thus, they will live a longer life.

Have you ever kept a Molly? If yes, what is your experience with this breed? If not, would you like one? Thanks for reading, and good luck with fish keeping until next time!