Feeding a betta or goldfish is an easy matter. Both kinds of fish snap at whatever hits the surface of the water! What if you are out of betta food and only have goldfish food on hand? Can betta fish eat goldfish food?

Bettas eat goldfish food when it’s offered. But goldfish foods aren’t very healthy for them because the balance of animal and plant matter is not good for them. Bettas are carnivores and goldfish are omnivores.

This video is an excellent breakdown of what foods are best for betta fish: 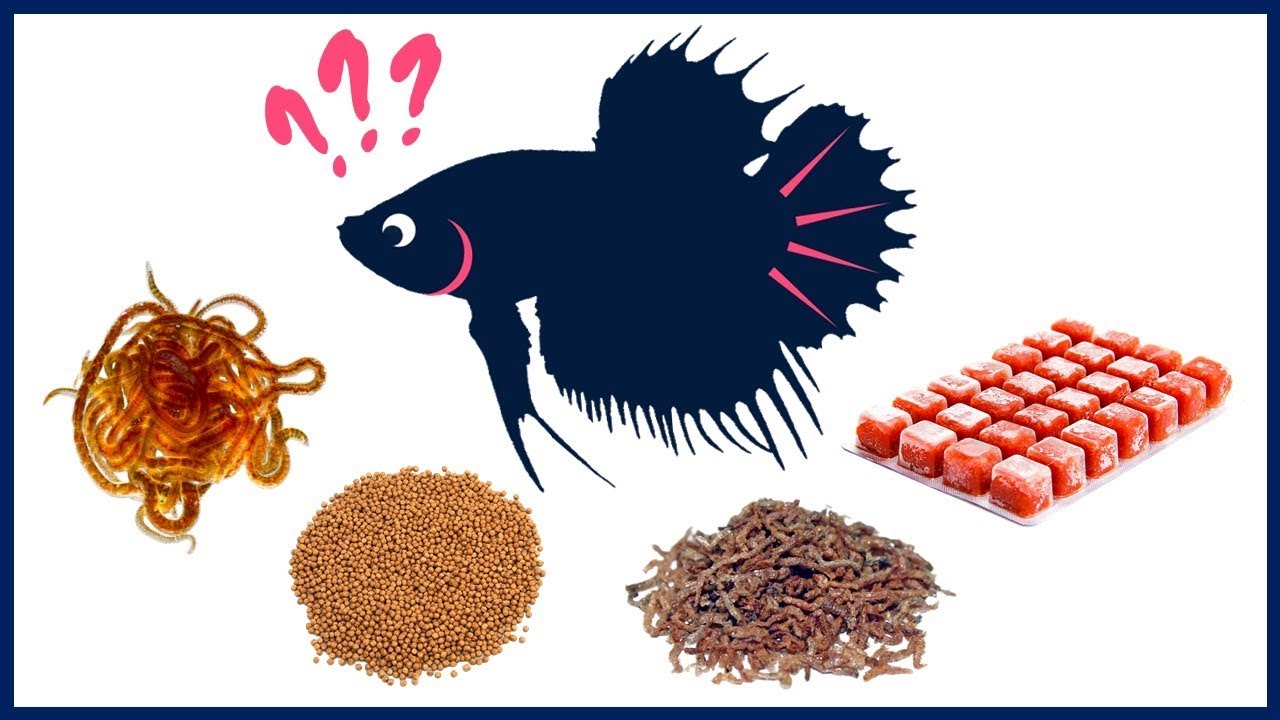 Only feed goldfish food if you have no choice. That said, bettas eat goldfish food because the two species do share some dietary similarities!

Can Betta Fish Eat Goldfish Food? Is It Safe For Them To Consume?

Part of the reason why betta fish are so popular is that they are eager feeders. But goldfish flakes and other non-betta approved items should stay out of their water.

Betta fish can’t fully digest goldfish food. It has many ingredients that are foreign to the digestive system of betta fish. The right food is formulated with the right balance of protein, fat, and carbohydrates.

You wouldn’t give dog food to your cat, just because they are mammals. The same goes for feeding bettas goldfish flakes or pellets.

Another reason to stick to betta fish food is that the size of a food formula might not be suitable for them. This is less of an issue with flake food. Even large flakes can be picked apart by a hungry betta.

Pellets and food sticks that are too large can get trapped in the mouth of a betta. Or it may not be able to eat them at all, going hungry. 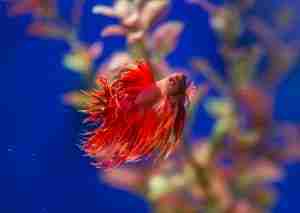 Betta fish are carnivorous fish. They live in hot, shallow, stagnant bodies of water. Here they find mosquito larvae, blood worms, and other kinds of aquatic insect larvae to eat.

Sometimes you will see betta fish listed as “omnivores.” This is not true. Goldfish, on the other hand, are actually omnivorous fish.

Betta fish eat small shrimp, baby fish, and other little animals they come across. Any betta fish diet should be rich in animal protein. They don’t need vegetation at all.

In fact, the best food for betta fish are pellets and flakes that don’t use vegetable-based filler ingredients.

To keep your pet fish healthy, try offering foods found in its natural habitat. Bettas come from warm bodies of slow-moving water that are loaded with aquatic plants. Just the right place to find small invertebrates!

You can even pick up rare treats like wingless fruit flies from many local pet stores. A varied diet goes a long way towards helping fish remain healthy. While a poor diet leads to disease in Siamese fighting fish. 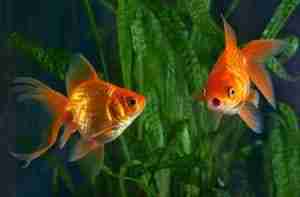 Goldfish and bettas eat animal matter whenever they can find it. So any pellet or flake formula needs to have fish protein, squid, krill, or other sources of protein.

Bettas eat frozen foods and live foods as well, just like goldfish. In fact, these items are even healthier for a betta fish since they need a lot of protein. Brine shrimp and blood worms are easy to find at your local pet store.

Both of these invertebrates are rich in carotenoid pigments. These molecules are sometimes added to flake and pellet formulas since they act as color enhancers.

When a fish eats a dried food formula or frozen foods with them, the red, orange, and yellow carotenoids make their own colors brighter! 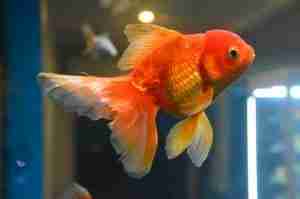 The main difference between the dietary needs of betta fish and goldfish is that goldfish are true omnivores. As an omnivore, goldfish eat both plant and animal matter. Betta fish don’t eat plant matter at all, making them carnivores.

Goldfish live along the bottom of slow-moving bodies of water. Here they hunt for snails, soft plants, worms, fish eggs, and other morsels.

Even buried food like small clams are not beyond their reach. When you see a goldfish rooting into the gravel, it’s looking for hidden treats.

Goldfish should not be given a high protein diet. They need higher levels of vegetation than betta fish do. That said, they do need some animal protein as well.

Can Betta Fish Get Sick From Eating Goldfish Food? 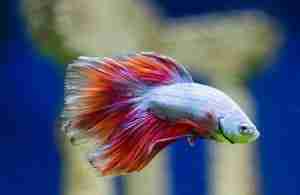 A betta’s digestive system is optimized for protein. It has a hard time processing a bellyful of fiber and carbohydrates. This can lead to intestinal bloating.

Plant-based fiber and carbohydrates can get stuck inside the intestinal tract. When this happens, bacteria start to feed on the plant matter. Causing gas to build up and toxins to leak into the betta fish’s bloodstream.

Bloating also happens when food absorbs water and swells up. Bettas don’t chew their food; they simply gulp it down quickly.

A dry pellet that hasn’t soaked up much water can swell if it’s full of plant matter. If the betta eats a large amount of goldfish food before the pellets soften, this swelling can become dangerous.

Intestinal bloat is hard to treat and often fatal. The best cure is prevention by only feeding betta fish food flakes and pellets that have mostly animal matter. Take a moment to read the ingredients label of your food formula.

The first two ingredients should be animal protein. Avoid cheap fillers like potato and wheat starch. Goldfish food can have these but carnivorous betta fish can’t digest plant matter well. Ultra Fresh Betta Fish Food is one blend that meets these criteria, with an 80:20 animal:plant based formula!

How Often Should A Betta Fish Eat? 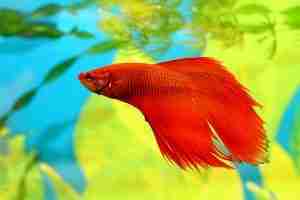 Bettas are active fish that live in a tropical climate. Their metabolisms are quite fast for a fish. Bettas thrive when they are fed multiple times per day. Whether that’s flakes, freeze dried meals, frozen food, or something else, many small meals are best.

Just because they eat a lot does not mean you should overfeed, however. Overfeeding leads to a fish tank with poor water quality. Leftover food decays into ammonia and feeds pathogenic bacteria, fungi, and white algae. All of which stresses even the hardiest of betta fish.

A good rule of thumb is to offer your betta enough food to fill the volume of its eyeball. For smaller fish, the stomach is about the size of its eye. Feed your betta two to three times per day.

Even if your betta dances in front of the tank every time you go by, that does not mean it’s always hungry. Fish will eat whenever food is available. That’s how any animal responds to excess nutrients. Since in the wild, you never know when your next meal will be.

How Long Can A Betta Fish Survive Without Food? 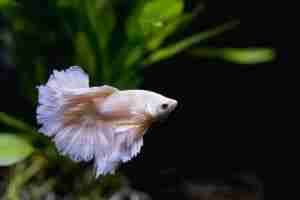 A well fed betta that suddenly has to go without food will not immediately die. Or even suffer from severe stress. Betta fish can go for 2 to 3 days without eating without being stressed.

So if you plan on taking a weekend trip, you are totally fine leaving your pet alone for a couple of days. Any longer and you should look at automatic fish feeders. Or having someone come by and drop some pellets into the betta tank.

Some stores still carry solid blocks of slow-release fish food. I don’t recommend these because they have very low nutritional value. Also, your fish aren’t the only things that will eat them.

Bacteria in your water will consume the slow-release food. Causing ammonia and nitrite levels to rise over time. The longer you are away, the more dangerous your water quality becomes. Especially if you have a small fish tank.

Bettas eat goldfish food when it’s offered. They are not picky eaters and treat anything you place in water as a possible meal.

But the nutritional value of goldfish food is not balanced to meet the needs of a betta fish. The plant material in it goes mostly undigested. Too much fiber and carbohydrates can even cause dangerous bloating.

That said, a little goldfish food is not likely to kill a betta fish. Just be sure to grab more betta fish food the moment you head out and do some shopping!